Wrong is Right: It’s more important to be willing to be wrong than to desire to be right

10 Comments Posted by stratecutionstories on April 5, 2013 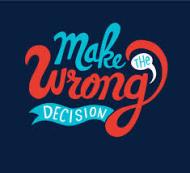 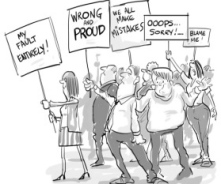 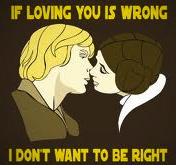 Given a choice, who wouldn’t rather be right than wrong? That’s an easy question to answer. And with whom would you rather work? Someone who is usually right, no doubt. But more and more I’m finding that it isn’t so cut-and-dried. Because, while wanting to be right might be everyone’s natural tendency, I’m finding that a willingness to be wrong is the more positive attribute – and is more often correlated with success.

I’m not saying that being wrong is better – but that being open to it is a better starting point. In fact, today’s “new normal” demands it. And maintaining an old school approach that focuses on getting the answer right can be a hindrance to finding the necessary, new solutions.

One problem with focusing on getting it right is it leaves zero margin for error for even a single mis-step. This keeps the steps, as well as the lateral leaps and iteration, to a minimum. Which means you can forget about innovation, creativity and continuous improvement. To say nothing about serendipity and the creative process.

And a demand for the right answer, vs. a willingness to be wrong, drives an overwhelming risk aversion. It pushes an agenda of over-perfection, over-correction and sticking-within-the lines that ensures below-average-ness. It dampens action-taking and beta-testing and learning from experience. And forget about “fail fast, succeed faster” notions.

Needing to be right is what keeps people rigid, steadfastly and unthinkingly adhering to their views and beliefs – making it impossible to learn, stretch or grow. Being unwilling to be wrong makes you say “no”, makes you avoid new things, keeps you from experimenting. Let alone listen to others’ views, engage in debate, or change your mind, god forbid.

As Stratecution teaches, you need to understand that your work, your effectiveness, your product, and your knowledge, all improve over time. That you will be iterating according to real-world information, learning and evolution. And, that you will end up at least some distance from where you started and from where you’d thought you’d end up. Thus, you have to be open to the fact that your in-going notions aren’t exactly right. You have to be willing to be wrong.

As a leader, promoting a willingness to be wrong does lots of good things:

– Recognizes the essential truth of business – there are no “right” answers.

– Shows a thirst for action and learning. You can generally gain more learning from being wrong than right.

– Drives a beta-test/agile approach that focuses on making things better.

– Shows a desire for growth.

Being wrong isn’t fun, it isn’t enjoyable and it may make you look and feel vulnerable. But it’s time to start viewing that as a virtuous asset. Perhaps this could happen if we viewed “wrong-ness” as a more temporary assignation – “momentarily wrong”, e.g. Or, even better, if we viewed wrong as just on the way to being right. It’s “soon-to-be-right”, or “nearly right”. That could help. Or perhaps I’m wrong.

10 responses to “Wrong is Right: It’s more important to be willing to be wrong than to desire to be right”