8 Comments Posted by stratecutionstories on March 9, 2012 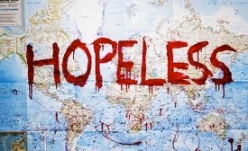 One of my teams was recently faced with a difficult work problem. The team was dealing with a complicated problem, with a difficult timeline, and an expectation of rough-sledding during the client review and approval process. This led to a palpable sense of negativity and a feeling of near-hopelessness among some team members. The situation spurred me to remember a parable related in the famous book “The Art of Possibility” by Benjamin and Rosamund Stone Zander. The story goes like this:

Now, I’m not going to write much about that second scout – the sunny-side-up guy. It’s difficult to expect anyone to approach things quite so optimistically. But the first guy is the one we can learn from. His hopelessness is something we can relate to. When the pattern for success is missing. The situation seems dark, complex and without a map. And nothing anyone can do seems likely to solve it. So you feel stuck, without the mind, the means or the passion to attack it.

So how can we try to be more like that second scout? Here are few approaches:

1) Don’t be ruled by what’s happened in the past
Based on past experience, selling shoes requires people who wear shoes already. However, as mutual funds always warn, past performance is no guarantee of future results. Which is why one of the phrases I hate the most is “we tried that already and it doesn’t work.” Just because it didn’t work before doesn’t mean it won’t, again. And, similarly, just because you’ve done something one way in the past doesn’t mean that another way might not also work, if not work better.

In addition, we must do our best to not get too hung up on how we expect our clients or partners to respond and react. Yes, we’ve all worked with people whose personalities and behaviors play a role in shaping our approaches to problem solving. However, for your own sanity, try not to allow a “they’ll never allow us to try that” or “they always want things a certain way” to prescribe your actions too much. Allow for some ‘possibility’. In a way, try on a bit of the second scout’s enthusiasm – consider that there may be some “glorious opportunity” due to the fact they haven’t done it before!

2) Start with an answer, not necessarily the answer
Sometimes one’s hopelessness is the feeling that the right answer is impossible to arrive at. You’ve come across some good thought-starters, but can’t nail it. You see issues with the ideas you’ve come up with, so you dump them and move on, and on, and on. Or worse, you come up with some good stuff, but you or other team members say you need to wait until you find something that’s great.

Well, maybe the answer is to start with the thought-starters. Instead, look for and use some of the good stuff – don’t worry about what’s “right” or “great” just yet. As I’ve written about before, the good is not the enemy of the great, no matter what anyone tells you. In fact, you’ll most assuredly get to great faster by starting with good, than by doing nothing.

3) Ask for help
My team that was struggling was holed up in a conference room for a couple days. They were proud folks, and they believed their job was to crack the problem themselves. They didn’t want to bother me, or anyone else, until they had solved it. And, I believe, they felt it would have been a failure, or a sign of weakness, to have asked others for help.

This is silly. When you’re stuck, or feeling hopeless, call in for some reinforcements.  First of all, good people are always willing and able to help. And they won’t view the requesters as any less capable for asking.

But, more importantly, there are no problems that can’t be solved without a few smart people in a room, bouncing thoughts around. And there are no solutions that don’t get better with the same approach. So don’t hesitate to put together a tight, efficient work-session with some folks to help you crack your problem.

4) Add fresh people to the mix
I’ve mentioned this before, but it’s natural for on-going teams to begin to develop a view of the limits of what’s possible, and establish a “right way” to do things. This can sometimes lead to getting stuck in a rut. It’s important, then, to occasionally add people to teams that can provide broader perspectives and new approaches, not just those that have worked in the past. Cynthia Rabe calls these folks “zero-gravity thinkers”. Think about adding this spice judiciously to your team, especially when you hear “Situation hopeless”.

What do you think? Any other advice for the hopeless? And should we all try to be more like the second shoe marketer?

Uncategorized advertising, advertising blog, Brand, Business, Creativity, Cross-functional team, digital advertising, engagement, execution, Leadership, management, marketing, media planning, Michael Baer, Problem solving, stratecution, strategy, The Art of Possibility: Transforming Professional and Personal Life
← The Age of the “Kordell Stewart” Employee – Why being a “Slash” is the key today Beware of Your Strengths – How your strengths can hurt you as much as your weaknesses →